IF IT AIN’T BROKE,
SHOOT-TO-MATCH IT

Our Creative Director; Jason Dollery draws on his previous experience
client-side to put into context how important this subject is to all parties involved,
from film-makers and creatives, to marketing and communication professionals.

In 2014, I was supporting the communication demands for a rapidly growing global channel. The sales teams needed to make an impact with the buyers so were pushing for training films and unique branding opportunities with stores. I had to get the buy-in (via video content) of two of the worlds leading consumer tech manufactures and all the while the majority of the marketing budget was geared towards the consumer story, which was shifting from television ever more to digital.

At the time, I had been led to believe that once a campaign was live, that content was final. Of course there was the option to change the end-board, product, or the language in post-production (so other territories could utilise it), but the film itself was stand-alone and fixed. If I wanted to extend the campaign it meant going back to the creative agency and essentially starting from scratch with no, or limited, existing assets or guidelines from the original campaign.

This fixed and final approach is as I discovered a legacy of the advertising agency model. It exists because of the huge cost, time and resource it takes for creative development and production for world-class television focused advertisement.
Today however, communication platforms have evolved and forced brand stakeholders to take on a wider remit, with the pressures of limited time and budget blurring the lines of where traditional roles begin and end. This wider remit often conflicts with the creative model.

Back in 2014, I was fortunate to have a transparent conversation with Sandstorm; my production company at the time, where we built into our creative approach the potential for re-shoots in the future. Everything in the production was documented, from light set-up and equipment choice, to the products used in hair & make-up. Post-production templates and grade settings where also stored. All of this was agreed with the creative agency and everyone was aligned that in the inevitable situation of other communication platforms requiring content we could use these guidelines internally (across the company that spanned most of Europe, Australia and the US) to produce lower budget work in specific territories. This forward planning allowed us to add-in or re-shoot scenes with new elements that perfectly match the original film. A particularly useful benefit when promoting a product that supports two of the biggest consumer tech manufacturers, that each want to only see their product in the final film. It was also amazing to add in time-tailored social content that addressed live events.

Think of what betting companies do now in between live games with real-time odds, and you have the principle for what we were doing back in 2014 only with new footage not just on-screen graphics. The technique of re-shooting content and amending it in the production stage is referred to as shoot-to-match. It’s an ideal solution because it delivers the same standard of visual identity and quality across multiple channels for a fraction of the budget. It also has the unlikely result of neutralising the perceived conflict between end-to-end production houses and creative agencies… once it is understood and worked into the schedule rather than hidden from one another.

The ‘new’ above-the-line creative, deserves the agency price tag, and as brand stake holders we should understand it is unreasonable to think our agencies can provide the same level of creative and execution for a platform with a fraction of the budget. Shoot-to-match allows end-to-end production companies to pick up where the agency (in my experience) can bottleneck. Freeing the creative agency from the hassles of multiple small budgets and allows them to focus on the big creative projects while the brand gets the highest quality performance optimised content, with a higher return on investment. Thus driving more demand for creative branded content.

The results in both ROI and time management when using shoot-to-match for me, were so significant that I took the opportunity to join Sandstorm a few years later and today educate other marketers on the production options available. One of the ways we do this is via educational videos. You can watch the latest Sandstorm Insight Film on the topic of Shoot-To-Match presented by myself, the creative director of Sandstorm, and senior producer Marie-Ann Morrell as we explain and showcase that even without blueprints or assets the team recreates entire scenes for the likes of Honda in just a matter of days ensuring the continued success of the campaign. 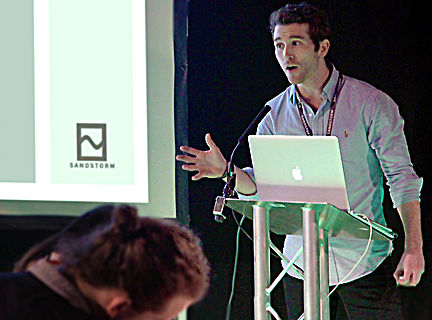 Find out how, and why to use Green Screen to enhance your next film.

The Joy of Sets

Take a look behind the scenes to see how intelligent set design can benefit your next campaign.

Find out how this often overlooked area of content production can make or break your campaign.